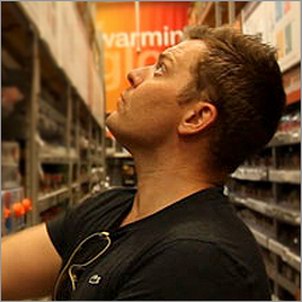 Andrew became involved in electro acoustic music very early, and began his formal exploration at the Stockholm Electronic Music Studio, going on to complete his HND in Music Technology at City College in Manchester. Subsequently, he completed a BEng in Electro Acoustics at Salford University, then moving to complete his masters at IRCAM in Paris, working as a sound designer and with IRCAM software.

Shortly afterwards, Andrew began making his own music, and was offered a multi album record deal with american label Soleilmoon on the strength of his first demo. His first release "Internal Dissident" under the moniker of "Black Faction", a dark electronica odyssey into the underworld driven by a sinuous sonic narrative weaving through stygian inspired rhythms, was received with widespread critical acclaim, and several other releases followed. During this time Andrew toured Europe regularly, performing his music to live audiences and playing sellout sets to appreciative crowds.

Andrew also developed an interest in designing intricate sound worlds for games, and went on to create audio for over 25 titles. Meanwhile his Black Faction work had come to the attention of a director at ITV, who then invited Andrew to create the score and sound effects for the TV Series "Barbarians: Secrets of the Dark Ages" which went on to receive a BAFTA nomination. Having gotten a taste for composing for the screen, Andrew went on to create music and sound for a number of other works for broadcast, including TV series and documentaries for BBC, Channel Five and Granada TV. When not composing for broadcast productions, Andrew delivered seminars on sound at various events as well as lecturing and creating learning module materials for educational institutions including the European "Game On" expo, the International Festival of Electronic Music and Audiovisual Arts and Manchester Metropolitan University.

Going on to win BBC's "New Sound Designer" award and an inhouse position with the BBC Radio Drama production unit, Andrew was then nominated to represent the UK on the Management Committee of the COST Action IC0601, a group of 18 delegates from 14 countries tasked with researching the use of sound as a principal channel for conveying information, meaning, and emotional qualities within the contexts of interaction design, auditory display and sonification, sound and music computing, sound modelling, and sound perception and cognition.

Always keen to put theory into action, Andrew then founded Radium Audio, proceeding to pick up Roses Design Awards nominations in the "Emerging Designer" and "Best Animation (Sound & Music)" categories, as well as winning both the Big Chip "Best Micro Business" and the Urbis "Best of Manchester Music" awards in his first year of business. Gathering a hand-picked team around him, Andrew continued his explorations in sound and music with London based Radium Audio for several years, going on to later to expand to a 3,600 sq foot production hub for sound and music at Bottle Yard Studios in Bristol.